Objectives
Students will become familiar with the characteristics of Pueblo pottery. They will learn about the history and methods involved in the making of the pottery and its status today. They will create their own piece of pottery using modeling clay. 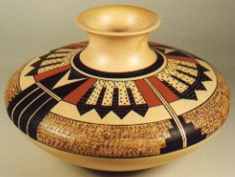 Have students share their completed pottery with the class discussing the method they used to create it, the chosen style, colors, and patterns. After all of the students have had a chance to share, have them reflect on their pottery-making experience as well as what they learned in general about the Pueblo peoples.
Evaluation
Were the students able to characterize the Pueblo pottery? Did they include these characteristics in their own pottery? Were they able to summarize what they learned from the activity and discussions? Did they appreciate the Pueblo art form?

Can You Sell Your Cereal?

Where Do You Live?

Have We Always Had Jeans?

National Anthems of the World

What is the Bill of Rights?